The Reverend William Levington founded St. James’ and was the first black priest to serve as a missionary of the church in the South.

Levington, a native of New York, was ordained a deacon on March 14, 1824 and a priest on March 23, 1828. Both ordinations were by Bishop William White of Pennsylvania (http://justus.anglican.org/resources/bio/202.html) at St. Thomas’ Church in Philadelphia. It worth noting that Bishop White also performed the ordination of Absalom Jones (http://www.satucket.com/lectionary/AbsalomJones.htm), the founder of St. Thomas’ parish in 1795, at which time Levington was an infant in New York.
In the same month he was ordained a deacon, Levington traveled to Baltimore with the goal of establishing a church for persons of African decent. Considering the social conditions facing people of color, the boldness and courage displayed by this thirty year-old man were remarkable. The Reverend George F. Bragg, (http://www.episcopalarchives.org/Afro-Anglican_history/exhibit/legacy/george_f_bragg.php), Rector of St. James’ from 1891 to 1940, wrote

And thus it came to pass that the little African babe born in New York, after having received his bristly light from the shrine of Absalom Jones, was the first of his kind to penetrate the land where slavery reigned, and successfully planted the cross of Jesus Christ, in spirit,

saying as he journeyed southward,

Nothing in my hand I bring, simply to Thy cross I cling.

with the blessings of the great Head of the Church, the twenty-third of June [1824], I got a place where I performed divine service and held a day and Sunday school.

This first place was at Park Avenue and Marion Street and was called the “Upper Room.”
From these humble beginnings, St. James’ Church has moved to various parts of Baltimore. The first church at North and Saratoga Streets was dedicated on March 31, 1927. In 1901, a new church was built at Park Avenue and Preston Street. At 6 o’clock Easter morning in 1932, the first service was held in our current building at Lafayette Square.

From its inception, St. James’ Episcopal Church-Lafayette Square became and remains a guiding force in the life of the community of Baltimore. Its long history of 184 years is best summarized in a time line. 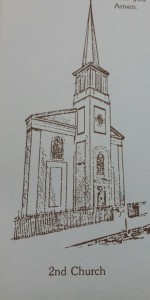 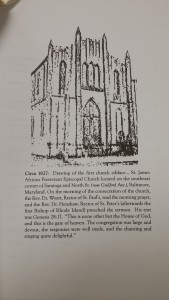 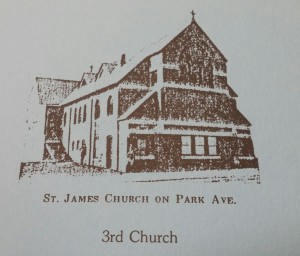